The AFD CSD online portal sales will be closed on 27.1.2023 at 6 PM. All CSD AFD customers should accept the new terms and conditions and reactivate your account.Click View More 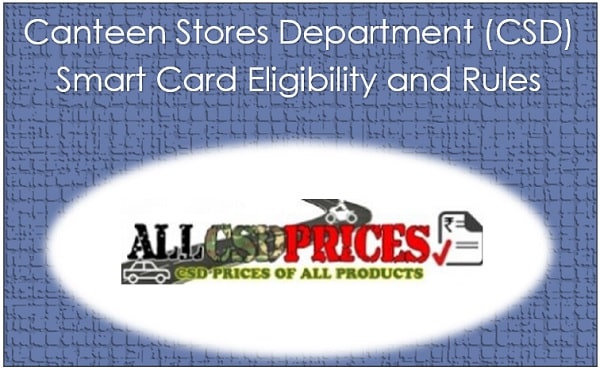 Generally, who are all eligible for availing CSD canteen facilities they can only apply for the smart card. Three Armed Forces Personnel and Officers, Ex-Servicemen and Civilian employees, and officers of OFB.

In accordance with Army Order AO 32/84, Ex-Servicemen and their families and Ex-defence personnel with a minimum of 5 years of service are entitled to CSD (I) Canteen facilities available in units/establishments. Cadets / Recruits boarded out on medical grounds are also entitled to avail CSD facilities.

Also check: Monetary Limits for all Ranks for Purchase of CSD Stores

As per the order issued on 4th May 2018 by the Integrated HQ of Ministry of Defence (Army), Canteen Services Directorate, due to exigencies of services, dependent canteen smart cards (grocery only) have been authorized to dependents of Armed Forces personnel (serving & retired) only.

Feedback has been received from the environment wrt misuse of dependent canteen smart cards by few beneficiaries. Following issues are reiterated:-

Parents of Armed Forces personnel (serving & retired) (only if
dependent, as per official records).

Further, the entitlement of dependent grocery canteen smart cards to children below 10 years of age has been done away with, with immediate effect. her,entit|ementofdependentgrocery-canteensmartcards.

The list of items purchased from all CSD Unit Run Canteen by monthly Limit on Grocery Items:

CSD AFD Price: The prices listed on this website are approximate values, obtained from authorized dealers! Since the launch of the CSD AFD online portal, the prices of cars, bikes, and other electronic products have been subject to change for various reasons. Therefore, all CSD AFD customers are encouraged to contact nearest dealer or Depot office to confirm the latest online price and availability prior to initiating any online purchases.