You are here: Home / Purchase Eligibility in CSD for Car, Bike, and AFD Items

Sales have been started for the month of January 2022: Purchase of AFD items of Cars, Bikes, Scooters and other electronic products please Click here 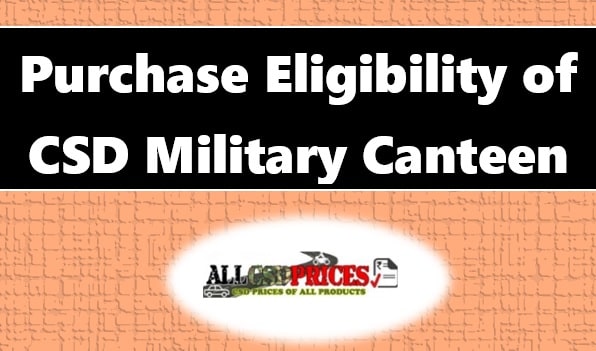 Who are all eligible for purchasing through CSD?

Generally says that the three Armed Forces Personnel are allowed to purchase in CSD. In-depth of the subject, there are a lot of rules and restrictions to buy a product through CSD. Who are all eligible to purchase a product from the URC canteen? Who are all entitled to buy a Car, Bike or any AFD Item through CSD?

a) All serving personnel of Armed Forces i.e. Army, Navy and Air Force and their families.

b) All Ex-servicemen pensioners paid from Defence Services Estimates.

c) All Ex-service personnel who have been released from service honourably after five years of coloured service but before completion of qualifying personable service and, therefore, are not in receipt of a pension from the Defence Services Estimates.

d) All Ex-service personnel released from Service on compassionate grounds at their own request having put in minimum five years of service.

e) All Ex-service personnel released from service honourably after completion of a minimum of five years of service as a result of a reduction in establishment/completion of a specific period of engagement.

f) All Ex-servicemen released on medical grounds attributable to military service without any stipulation of service rendered.

g) Widows of Service officers including Honorary Commissioned / EC / SSC whether the officer expired while in service or after retirement.

i) Widows of Service officers including Honorary / SSC / EC who get remarried and continue to draw a pension from Defence Services Estimates.

j) Widows of Service personnel other than officers who get remarried and continue to draw a pension from Defence Services Estimates.

Car through CSD Canteen for Ex-Servicemen

All Ex-servicemen personnel and pensioners are eligible for buying car from CSD Canteen.

a) All serving personnel of GREF.

b) All retired GREF personnel who are in receipt of pension from Defence Service Estimate and those who have left after completing a minimum five years of service.

c) Widows of GREF personnel (all ranks) who are in receipt of family pension from GREF.

a) All serving DSC personnel.

b) Ex-DSC personnel who are on receipt of a pension from Defence Service Estimates.

Defence Civilians: Following categories of civilian employees paid from Defence Services Estimates and also those employed in the undermentioned Ministries Departments are permitted to make a purchase from Service Canteens

e) Indian Defence Accounts Services who are serving on deputation to posts other than those in the Ministry of Defence (Fin).

h) Serving and retired employees of Canteen Stores Department, who are getting a pension from CSD Funds.

Those who are in receipt of disability pension are entitled to CSD facilities as per authorisation.

Those who joined the Burma Army prior to 1939 and are in
receipt of a pension from the Government of India are entitled to CSD facilities.

Foreign Military personnel attending courses of instructions in our training establishments are entitled to CSD facilities.

a) Separated families of Service personnel are entitled to purchase canteen stores from Service canteen.

b) A “Separated Family‟ for purposes of Canteen facilities is defined as a family the head of which is:

i) A prisoner of war.

ii) Separated from his family for a short duration on account of his being away on temporary duty, courses of instruction, any other exigencies of service or the family visiting another station.

iii) Posted to a station to which he is not precluded by order from taking his
family but where married accommodation is not available.

iv) Posted to a station to which he is not precluded by order from taking his
family.

c) In the case where the wives of officers, JCOs and OR cannot purchase Canteen Stores themselves for any of the following reasons :

i) The wife being a purdah lady.

ii) The wife is unable to proceed regularly to obtain canteen stores due to her
village being distant from the nearest Service Canteen. A representative may be nominated to purchase canteen stores on behalf of the separated family.

In such cases, the nominated representative will draw the canteen stores on
the production of Smart Card authority letter issued from Station HQ / Secretary, Zila Sainik Board / Deputy Director, Zila Sainik Board Secretary of District Sailors / Soldiers and Airmen‟s Boards.

d) For the purpose of this concession, the family of an individual will comprise his wife and dependent children only.

Check other updates on this topic:

What are the car purchase eligibility rules in online CSD?

As per the CSD notification dated 29 October 2020, the revised car purchasing policy rules amended as per the Pay Matrix Level and Cost of the vehicle. Click to view the notification.